To have the optimal experience while using this site, you will need to update your browser. You may want to try one of the following alternatives:

5 Common Causes of Fires (and How to Prevent Them) 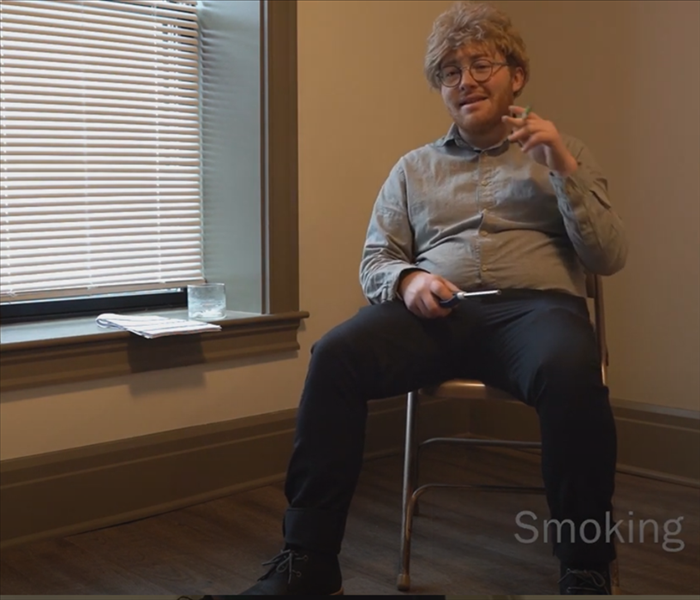 Smoking is one of the leading causes of fires in the US.

Hundreds of thousands of fires each year destroy homes, cause harm and disrupt people's lives. Most of them are preventable.

We gathered data on the top 5 causes of preventable fires, as well as how to prevent them, and put them into a fun video to educate property managers in Western New York. We even broke out the wigs for it.

You can check it out here.

I'm here in an apartment and we're going to look at some of the features that are designed for fire protection. It's important to remember that fires are preventable and that the best solution is prevention.

Let's take a look at some of the common causes.

Cooking is the number one cause of preventable home fires and you can see our friend here making huge mistakes left and right. Kind of a dummy.

You should not cook when you're tired, if it's the middle of the night. If you just got home from a late night, be careful.

You should also not cook while you're drinking, especially if you've been drinking more than one or two glasses of wine, because your attention is going to be split to say the least.

In the event of a grease fire, your first instinct is going to be to get some water to put the fire out. Do not do this - you may just cause grease to splatter and you may cause the fire to spread.

Instead of that, cover the fire with a pan. Starved of oxygen, it will go out on its own. You can also use baking soda in some occasions.

That said, if that fire becomes too much to handle or if you start to get worried for your own safety, just get out and call 9-1-1 from outside the apartment, from a neighbor's house, whatever you have to do.

Of course, in the winter, you need to keep your home warm, especially in Buffalo. But heating elements like fireplaces or space heaters can be major causes of residential and commercial fires.

You should keep anything that can burn at least three feet away from that heating source. You should also turn the heater off when you're leaving the room or if you're going to sleep. I know everybody likes to go to bed toasty, but it's not safe.

Electrical fires are also all too common, but they can be avoided with a bit of common sense.

You should only plug in one heat-producing appliance at a time. For major appliances like refrigerators, plug those directly into outlets - don't use extension cords or power strips. Finally, use light bulbs with the right number of watts. Those watts are listed on the sticker on the side in most cases

Smoking is less common than it used to be, but it's still a major cause of preventable fires. In fact, according to the National Fire Protection Association, over 17,000 home fires per year were caused by smoking.

Store cigarettes and lighters high up or in locked cabinets so children cannot access them.

Put out your cigarette in a deep sturdy ash tray when you're done. Make sure it's away from anything that could burn.

Candles can be a major cause of home fires, causing over 7,000 fires per year, especially over the holidays. You should ensure that candles are at least one foot away from anything that could possibly burn. Finally, blow your candles out before you leave the room or go to bed. Everybody likes a bit of ambiance, but it's not safe.

It's important to remember that fires are preventable so long as you know the risks. Still, it's important to be prepared for the worst case scenario, so let's take a look at developing an emergency response plan.